Let’s get one thing straight when we teach others about the condition. Type 1 diabetes can affect anyone. This isn’t a condition strictly limited to those who are overweight, or eat a diet high in refined sugars, or are of a particular race, gender, nationality or age. It isn’t caused by lifestyle choices or anything anyone did or didn’t do. Remember that. There is nothing you could have done to prevent it from developing. Your diagnosis was absolutely 100% not your fault, no matter how anyone may try and make you feel. Often, that blame is due to misrepresentation (I’m looking at you, media) and misconception.

With type 1 diabetes, your immune system starts to attack the beta cells in your pancreas which produce insulin. No one knows why this happens. It just does. A bit like when you wake up some mornings and want to punch everyone in the side of the head just because it’s Monday and your mam’s forgotten to buy teabags. None of the choices you’ve made have contributed to this problem. And as diabetes is non-contagious, you won’t have caught it from anyone either. For some reason, something just caused your immune system to go a bit strange and start destroying something it didn’t need to. There’s currently a lot of research being carried out on what might have created this problem, and so far all we know is that there may be hereditary factors involved (though there are a number of other factors under consideration too), and more work is being carried out to find out what sort of culprits we could hold accountable. For example, there could be evidence to say that viral infections or toxins may have had a part to play.

I feel like I’m the only person dealing with diabetes. There’s Aunt Mabel, but she’s type 2…
Diabetes can feel extremely isolating when you’ve got so much responsibility put upon your shoulders to manage it, particularly when you take into consideration all the other things you have to deal with as a teen or young adult: puberty, exams, friendships, relationships, drinking, sex, college, university, arguing with your parents, or the new season of Game of Thrones (tension, init).
It wasn’t until years later that I met other people with diabetes and have since formed great friendships with people who all understand the struggles, but keep on being awesome at what they do. One has released an album and tours venues internationally. One is a bodybuilder. One runs a successful magazine. I managed to come out of my Masters degree with the Distinction I wanted too. One thing my friends with type 1 diabetes all have in common, apart from their diagnosis, is that they’re all fantastic, go-getting people in their own rights who see themselves first and manage the diabetes second. This doesn’t mean letting go of control or self-management and chucking all your insulin pens in the bin to go and pursue your dreams of being the lead singer of a heavy metal band (by all means go for it, just take your insulin with you). As tiresome as it is, you need to make sure you’re in control of your diabetes, not the other way around. Don’t let diabetes dictate how you feel about yourself as a person. 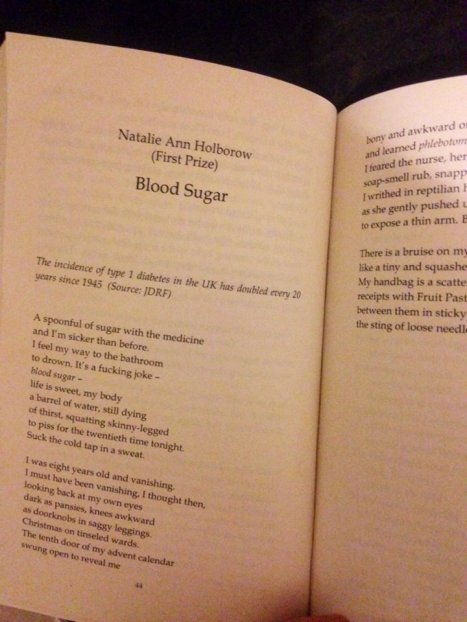 Maybe you haven’t met others yet who share this experience with you. I tended to find that support groups and meetups were often directed at younger children and these would be centred around summer camps and things where they could form friendships from a young age. What if you never had this as a kid, and now you’re too old for sitting in bowling alleys with six-year olds, bolusing together for Slush Puppies? Also, I didn’t want to be made to sit in a room with other diabetics and talk about being ill. I just wanted to go out, have fun, and know that if I was having a bad day, these guys would 100% understand because they’d all been there too.
According to JDRF, approximately 400,000 people in the UK are currently living with type 1 diabetes in the UK, 29,000 of whom are children. This number is increasing by a rate of 4% each year. That’s a lot of needles and test strips and bottles of Lucozade glugged in the sweaty darkness of a midnight hypo (or, more commonly, half of the fridge in a befuddled and desperate attempt to stop the shaking and bottomless hunger).
Part of the reason for this blog is for you to understand that though it might feel like nobody quite gets it, there are others out there going through those same struggles that you are. There are people out there sharing your bad days when they happen, and sometimes just this thought alone can be a slight comfort. Reach out to people where you need it. Trust me, isolating yourself even further will only make things worse, so even if you can’t face looking up a local Diabetes UK support group to go to, contacting a helpline or joining an online community (JDRF TypeOneNation is an excellent example – for a full list of organisations, groups and communities, please see the back of this book), maybe try searching for blogs by other young adults and teens with diabetes. You might be surprised to find how many there are; there’s a whole wealth of honest, tell-it-like-it-is accounts of how to live your life to the full with diabetes, even when life throws its little dramas in the way. 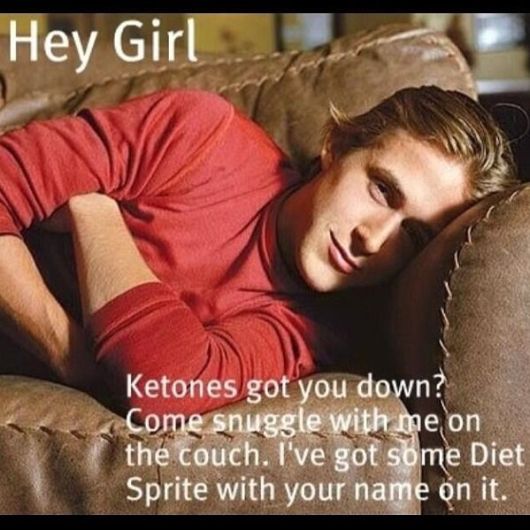 What’s making my blood sugars go a bit loopy?
When you have type 1 diabetes, your blood sugar levels are too high. This is because those beta-cells we mentioned earlier have stopped producing insulin. Insulin is a hormone which transports all that glucose in your blood to your cells. So when you eat a meal, the glucose which is then present in the blood is transported to the cells to use for energy. With diabetes however, there is not enough insulin to shift this influx of glucose, and so it cannot be stored for energy. This is why when our blood sugars run high, we might be found snoring across our desks with another empty bottle of Evian clutched in our hands. Your body will try to reduce your blood glucose by flushing all that excess glucose out in your urine.
Never great when you’re on a five-hour plane journey and you’re caught in the window seat next to a heavy sleeper.
On the other hand, once you start insulin treatment, there’s the other extreme you have to look out for: hypoglycaemia, or low blood sugars. This is that phenomenon that has you shovelling Frosted Shreddies into your mouth in your pants at 4am, cereal spilling all over the floor as your hands shake on their way out of the box. This is the condition that most people seem to be somehow aware of, yet not understand fully if they’ve only seen it fleetingly on a particularly dramatic episode of Casualty.

Why injections? Why can’t I just have tablets?
Insulin must be injected into the bloodstream in order to treat diabetes. I know, I know. You never do forget that moment when the doctor perches himself/herself at the end of your hospital bed and says, ‘You’ll have to inject insulin every day.’
Injections aren’t nice. Perhaps you may even be needle-phobic (don’t feel stupid – it’s actually surprisingly common in people with diabetes. I even needed over three years of therapy to get over my fear of blood tests and couldn’t inject myself for four years. Plus I have three tattoos, which makes it all the more ridiculous. More on the topic of needle phobia later). You hear of Type 2 diabetics taking tablets to manage their diabetes, so surely we can just do the same right?

Unfortunately, we can’t. More research is being done to develop oral insulin, but until then I’m afraid it’s a case of screwing the needle cap onto the pen and sticking it in your abdomen/thigh/arm/bum (I’d recommend you don’t do the latter at the table in the middle of a busy restaurant, especially when on a date). You can also opt for the insulin pump, in which case you’d be using a needle once every three days to change the cannula on the infusion set, but as a type 1 diabetic the needles can’t be avoided. Insulin is a protein, which means that if we swallowed it as a pill, our stomachs would simply break it down during digestion. This is why we need to inject it directly into fatty tissue.

People tell me horrible things about complications, and I see it on the news too. Will my feet be amputated? Am I going to go blind? Doom.
Okay, okay, stop. Take a deep breath. The scary stories can get to me too sometimes, but just remember, a lot of it is sensationalism. That’s what makes a great headline.
While it’s true that uncontrolled diabetes can give rise to complications such as kidney disease, foot problems, nerve damage and retinopathy, you’re not ultimately doomed to suffer all of these things. I used to be exactly the same. I still can’t watch programmes which claim to expose the “shocking truth” of diabetes, because I know half of it is worst-case-scenario stuff meant to scare me, and it usually succeeds. But just remember, when these programmes do this, they really do focus on the worst possible scenario and they’re taking into account type 2 diabetes as well as type 1. It takes years of poor diabetes control to cause this, so don’t freak out it you get the odd high blood sugar level now and then. Your toes won’t drop off because you miscalculated your bolus for an extra scoop of Ben and Jerry’s, or because you forgot to plug your pump back in after the shower for a little too long.
And even if you have had poor blood sugar levels for a little while, don’t start believing it’s too late to do anything about it; please don’t let other people try and tell you that you have no future other than horrible complications and treatments and pain. One of the aims of this blog is to help you to relax a bit, get things straight, get you to stop being so damn hard on yourself and show you that you’ve still got as much as a chance as anyone else to achieve exactly what you want to achieve. It’s about learning to live with diabetes, rather than see yourself as having to fight against it. You’re not defined by the numbers on your blood sugar meter.
This post should hopefully have helped you get a little more understanding of the condition if you’re newly-diagnosed, or if a family member has been diagnosed, or even if you just want to know more about it. It might not feel like it now, but life doesn’t have to stop when your pancreas does.

Award-winning author of 'And Suddenly You Find Yourself' (Parthian, 2017) and 'Small' (Parthian, 2020). Co-editor and trustee of the annual Cheval Anthology. Content writer specialising in Learning and Development (L&D) and education. View all posts by natalieholborow